A new marine export facility was announced as the winner of the 2019 Australian Construction Achievement Award (ACAA) at a major industry event in Sydney last night.

The Chith Export Facility at Weipa in Far North Queensland secured the prize for McConnell Dowell Constructors (Aust) Pty Ltd, which the constructed facility in 10 months.

The facility comprises a 650-m-long access jetty, a 350-m-long wharf and an onshore conveyor system that will service an expanded bauxite mine operated by the metals and mining corporation Rio Tinto.

The facility was recognised for revolutionising the design and construction of large-scale wharf infrastructure, and setting new benchmarks for safe, smart and efficient marine construction.

The ACAA is promoted by the Australian Constructors Association (ACA) and Engineers Australia and is the peak annual award for the major players in Australia’s construction industry.

The award is fiercely contested by the largest construction and engineering businesses operating in Australia. Projects must qualify as finalists before submitting to rigorous assessment by an independent panel of experts. 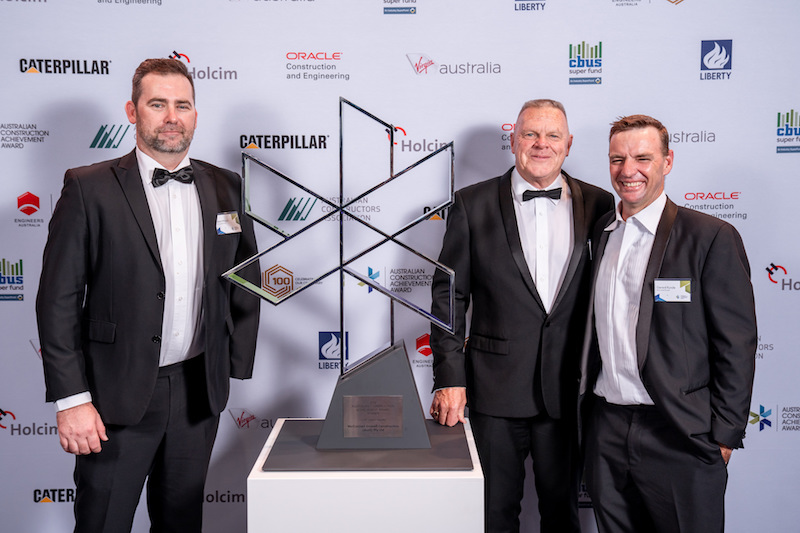 The Chair of the judging panel, Mark Dohrmann, praised McConnell Dowell’s execution of the project.

“[It] was a standout for its comprehensive achievement of all major judging criteria, including on-time completion of a difficult and complex construction in a remote region, timely responses to quality issues overseas, exemplary safety, environmental sensitivity, and close collaboration with contractors,” he said.

This reduced the number of permanent wharf piles required from 100 to just 28, minimising the project’s effect on marine life.

The facility was designed by construction company Jacobs and had constructability input and oversight by engineering, construction and project management company Bechtel.

According to a media release, Scott Cummins, CEO of McConnell Dowell, said the project showcased the team’s ability to collaboratively develop and implement creative customer-focused solutions.

Among the other finalists were the Barangaroo South regeneration by Lendlease; a bridge over the Clarence River at Harwood, New South Wales, by Pacifico; and the Toowoomba Second Range Crossing by Nexus Delivery.

Trish White, National President of Engineers Australia, praised the quality of the finalists and said they demonstrated an evolution in quality design and performance within the construction industry.

“The drive for best-for-project outcomes utilising good cross-team relationships is a feature of the success of these projects,” she said.

The ACAA is now in its 22nd year. Previous winners have included Optus Stadium in Perth, the Alice Springs to Darwin rail link and Southern Cross Station in Melbourne.