Carillion had more than 400 public sector contracts when it went into liquidation and the UK’s National Audit Office has estimated the company’s demise will cost British taxpayers around £148 million ($272 million).

While governments were now more seriously considering how they should share risk with construction companies before signing contracts to keep projects on track – the NSW government has tipped an additional $576 million into the Sydney CBD light rail project to make sure it gets finished – careful assessment of risk could go “out the window” in the heat of a deal, Mr Timbs said.

“I don’t think there are many people in Victoria and NSW looking at the whole picture and saying: What’s happening across the whole market, what does the forward order book for some of these construction companies look like and how much can they actually take on? Let’s sort of test that a bit and if we do get a delay in a project, what’s the knock on effect of that?

“It’s hard to predict but you wouldn’t say [a collapse] is impossible.”

I don’t think there are many people in Victoria and NSW looking at the whole picture.

If a big construction company working on a multibillion dollar project did go broke, it may be hard to find another company with the capacity to complete it, leaving the project stranded, Mr Timbs said.

Superannuation funds could also suffer from a potential collapse of a construction group.

Nik Kemp, head of infrastructure for AustralianSuper, said the fund was taking construction risk because it was invested in projects like Sydney’s $16.8 billion WestConnex motorway, which has not been completed.

Mr Kemp agreed a potential collapse of a construction company was possible. “It’s a bit like airlines, you think they are all very stable until one disappears and it just happens.”

Governments as well as private managers of infrastructure projects are usually reluctant to reveal or explain problems on projects, with Lendlease’s hefty writedown late last year on its engineering business due to losses on Transurban’s NorthConnex motorway project taking investors by surprise. Transurban has not disclosed when exactly it expects NorthConnex to be finished.

Benedicte Colin, director of infrastructure investments for Canadian pension fund Caisse de depot et placement du Quebec (CDPQ), said funds were investing in a broader range of assets, such as a new cruise terminal at the Port of Brisbane even through it meant taking on risks on passenger numbers, due to competition for traditional infrastructure assets. 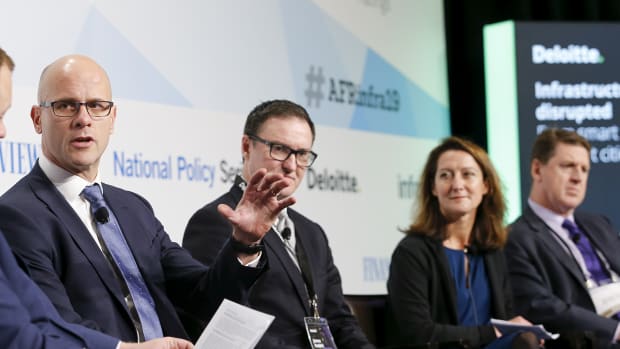 Investors told the summit that they are looking at a broader range of infrastructure. Wayne Taylor

“It’s really looking at infrastructure perhaps in a less lazy manner – less passive and being more proactive,” she said.

Ms Colin said that investment risks in Australia had been increasing and that last year was “a perfect storm” due to the new Stapled Structures Act, which limits tax exemptions for foreign pension funds, as well as the energy policy wars and technological disruption.

“When you add them all up, it’s making it very hard to go back to our headquarters in Montreal and say well we want to invest more in Australia – which we do.”

AEC Hackathon: How a common idea became an international event