“There was a little bit of conflict but over time the guys just adapt, especially as you get to know them. You know it’s hard for them too, it’s not just for us. So it works both ways.” 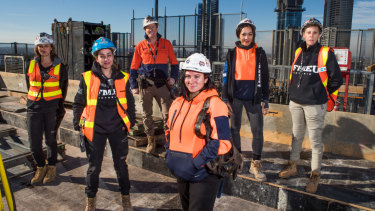 Just 1 per cent of workers in blue-collar construction jobs are women, with the majority of them employed as builder labourers, which includes traffic control.

Mrs Lebessis is part of a growing tide of women forging a way in the industry.

“[Traffic control] is generally the starting point. It’s about gaining skills and experience and it’s a good starting point to see a construction site from the outside in,” she said.

The current approved hourly rate for a CW1 general labourer or traffic controller is $43.53 an hour, a huge jump from the average $22 in childcare.

Men make up 88 per cent of the construction workforce in Australia and 84 per cent in mining, while women dominate healthcare and social assistance at 79 per cent, according to 2017-18 Australian Bureau of Statistics figures.

But only 2 per cent of construction apprentices are female.

Kangan Institute lead educator in construction Mick Fry said they would be lucky to have one or two female pre-apprentices in a class.

But the pre-apprenticeship painting class is bucking the trend, with seven female students out of 42. “Through our painting department, three of our last four apprentices of the year have actually been girls,” he said.

And the last two apprentices of the year were also women in the electrical department.

“Legislation around discrimination and bullying will definitely be making it easier for women in the trades, but the on-site behaviour that I had to deal with as an apprentice 30 years ago is not the same. People have modified their behaviour to make it more comfortable for people to be there.”

Cody Taylor, 20, is one of two women in her pre-apprenticeship carpentry course of about 15 students. 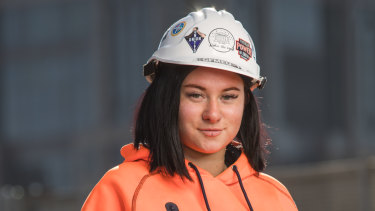 “Growing up my mum has always been in a male-dominated workforce; she works on the wharf,” she said.

“I was always told if you want to do it, you can do it. It doesn’t matter if it’s a male-dominated place.”

She campaigned to rule that out back in the 1990s, but still works with employers “on a daily basis” to make the industry more appealing to women and counter cases of gender harassment.

She says of 30,000 Victorian construction union members, about 300 are women. Although the figure could be higher as traffic controllers are generally un-unionised.

She believes as more women join the industry, they will become less of “a novelty or gimmick, or ticking the numbers or the quotas box”.

The National Association of Women in Construction chief executive Brett Schimming says the root of construction’s gender problem is not women’s work preferences; it is the industry’s culture and those who perpetuate it.

“As long as the culture of construction remains unattractive to women, we will continue to see little progress made,” Mr Schimming said.

Ms Zanatta said change needs to come not only from the industry itself, but from entry into it.

Does the perception or the culture of the industry prohibit young girls from thinking about completing a trade? We think, possibly yes.

“We have a really big challenge to change the minds and attitudes of not only careers in schools but how blue-collar industries [are perceived]. Also the conversations we’re having with our daughters around dinner tables,” she said.

Kelly Ngu, 26, says there have been changes since she started (she now has access to a female toilet), but public perception of construction workers is still outdated. 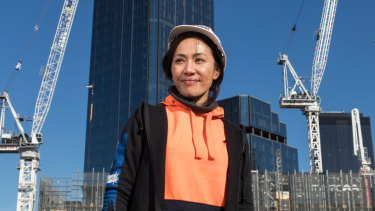 “I don’t think they really understand what I’m capable of at a worksite.

“I love my job because when I wake up in the morning I feel like I’m in control when I’m at work. I like proving people wrong.”

The CFMEU, industry and state government are working in the Building Industry Consultative Council on the state’s first Women in Construction Strategy after $500,000 was committed in June last year. The strategy is expected to be launched in the coming months and is part of a push to get more women into the industry.

But Mrs Lebessis from Burwood East doesn’t think the boys’ club mentality will ever change and that “guys have adapted as much as they can”.

“The fact they are more respectful to us and invite us in, personally, is enough,” she said.

“I don’t think guys are discriminating as much as they used to do. They are accepting more. I think it’s come along way from where it was many years ago.”

Teena Simpson, 51, has been in the industry for 17 years and although she doesn’t think it’s a boys’ club, she does think there are some older generation construction workers who probably don’t like women coming into the industry.

When she started she was the only woman on site and recommends women who are interested in construction get a trade.

“It’s just like any job. We’re not here to take over the world. We just want to be equal and do a fair day’s work and I think the guys now, they accept it more. They get used to you being on site.” 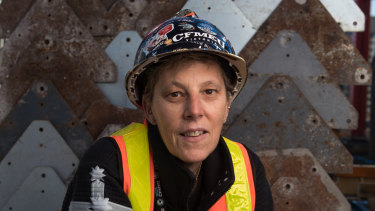 Teena Simpson, 51, is a labourer and has been in the industry for 17 years.Credit:Jason South

“Things probably do need to be changed in some ways, but let’s not forget it is a male-dominated area so we just need to chip away and I think that’s what we’re doing.”

Nicole Precel is a video journalist and reporter at The Age. She is also a documentary maker.

Experiencing the power of ARCHICAD with KA Designworks