Prime Minister Scott Morrison last week lashed the “deeply distressing” decision by Balinese authorities to allow a restaurant to be built on the site. It has stood vacant since bombs planted by terror group Jemaah Islamiyah, which has links to al-Qaeda, destroyed the Sari Club and Paddy’s Bar.

But on Sunday, a Hindu cleansing ceremony was held on the site and Jay Chandra, a consultant on the project and representative and relative of the land owners, said the first stone would be laid for the 353-seat restaurant on Wednesday. 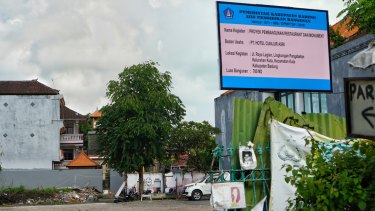 A building permit sign for a 700-square-metre building on the site was placed at the former Sari Club last week.Credit:Amilia Rosa

“We have met and negotiate since January. Even though it is our rights as the owner we were willing to accommodate them (the Bali Peace Park). We respect the victims, we will keep the monument on top whether the deal will go through or not, whatever happens to the negotiation,” he said.

“We planned an elevator that will go straight to the top area [the monument]. [The reason] why we placed it on top, because at the moment, the land is not being respected [it is a parking lot], to urinate, by unknown people.

“The way it is now, the sacred site is being disrespected, the top floor means we place the monument at the top, at the highest point. The lower floors will be to revive the economy for the locals – to revive the economy we’ve lost for the last 17 years. We are the victims here, our land was unproductive for years, we lost people too, our friends.”

Asked whether the Indonesian flag was now being flown in direct response to Mr Morrison’s comments, Mr Chandra said it was “to show us as Indonesians, we will not let an intervention over even a centimetre of our land”.

“It is to show this is Indonesia,” he said. “Some people are trying to intervene, politicising it.”

Made Badra, the head of Badung tourism office, said he had seen the building permit and there were no plans – as has previously been suggested – for a nightclub to be constructed.

“It’s for restaurants and for locals to sell local products and local food, not a nightclub. It will have a natural looking to it,” he said. “Definitely not for a nightclub.”

The head of Kuta village, Ketut Suwana, said the restaurant complex would be good for the village and the local community as it would revitalise the area and provide new jobs for the locals.

“Keeping it as it is, it’s a slum, people throw rubbish here,” he said. “To remember the tragedy, we have the monument built [a separate monument to the bombing is across the road from the site], the government is not neglecting the tragedy.”

James Massola is south-east Asia correspondent, based in Jakarta. He was previously chief political correspondent for The Sydney Morning Herald and The Age, based in Canberra. He has been a Walkley and Quills finalist on three occasions.

Archinaut, a Construction Robot for Space, Could Launch a Test Flight in 2022 –...