The company has said it is “vigorously defending” the lawsuit.

According to court documents, obtained by the Herald, Bilal Alelaimat is claiming damages and costs after scaffolding fell and hit him at the construction site on Hampton Road.

Synergy employees were dismantling scaffolding on the third level of the construction site when a piece allegedly fell and hit Mr Alelaimat, who was moving and loading various parts below.

At the time, Mr Alelaimat was employed by DJ’s Scaffolding Services as a labourer and driver.

However, he alleges he was “directed, coordinated and supervised” by Synergy Scaffolding Services and reported to the company “in relation to all aspects” of his work.

Synergy denies the allegations and argues it was not guilty of any negligence.

Any loss or damage suffered by Mr Alelaimat was his own fault, the defence alleged, because of “placing himself in a position of peril in the circumstances” and “failing to keep a proper lookout”.

The company also argued the statute of limitations had expired for Mr Alelaimat’s claim, which was filed in 2017. Under the NSW Limitations Act 1969, personal injury actions must be commenced within three years.

In a statement to the Herald, Synergy’s lawyer Ibrahim Dakdouk said the individual involved in the case was “not a labourer or employee of Synergy”. 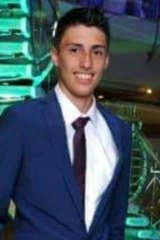 Christopher Cassaniti, 18, died in the accident.Credit:Facebook

“Synergy wishes to respect the legal process and all parties rights to a fair trial and therefore will abstain from delving into the particulars of the case, save to say the claim will be vigorously defended,” he said.

SafeWork NSW continues to investigate the cause of the Macquarie Park scaffolding collapse, which killed Mr Cassaniti just a week after his 18th birthday.

Dozens of grieving workers donned high-visibility orange shirts as they paid their respects at his funeral, held on Friday at St Mary’s Cathedral.

“My Baby. My Hero. My Guardian Angel,” his mother, Patrizia Cassaniti, wrote on Facebook. “Everyday that passes the pain in my heart gets greater and I really miss you. May God hold you tight for me.”

Ganellan – the builder in charge of the Macquarie Park construction site – issued a statement on Friday, extending its “thoughts and deepest sympathies” to the Cassaniti family.

“As a mark of respect to Christopher and the Cassaniti family, Ganellen has closed its project sites today,” it said in a statement on Friday, which named the second injured worker as Khaled Wehbe.

“Our thoughts are also with Khaled Wehbe, his colleague, who continues to move forward in his recovery.”

The Cassaniti family has pleaded with the state government to ensure their son’s death was not in vain, by taking action to tackle construction site safety across the state.

WorkSafe NSW has investigated a string of major scaffolding collapses over the last five years.

In 2015, four storeys of scaffolding collapsed during peak hour at Rockdale, hitting powerlines and two cars.

In 2014, a six storey scaffolding structure caved in at a Redfern building site.

The same year three people were injured when scaffolding crumbled at Mascot, with two workers dramatically forced to ride it 10 metres to the ground.

Carrie Fellner is an investigative reporter for The Sydney Morning Herald.

Construction downturn will hit Melbourne next – The Australian Financial Review