Owners say the system must be changed for future owners so that builders and contractors either take out insurance or set up a fund to cover these defects and an independent body or the government must certify a defective building with a clean bill of health after remediation.

There are no statutory insurance protections for tall, large-scale apartment towers, apart from a statutory six-year warranty.

For older properties such as the 10-year old Mascot Towers, owners will have little recourse to claims unless they seek legal action.

Next Tuesday, the last insurer willing to issue professional indemnity policies free of cladding exclusions will exit Australia, leaving building certifiers and surveyors, as well as fire engineers and architects no way to renew their registration and abide by state requirements for unencumbered policies to protect them and their clients.

NSW – encouraged to do so by the federal government – has stepped in to temporarily allow certifiers to keep practising without cover, which was the opposite of Victoria, which earlier in the week said it would underwrite professional indemnity for building industry consultants as a last resort. 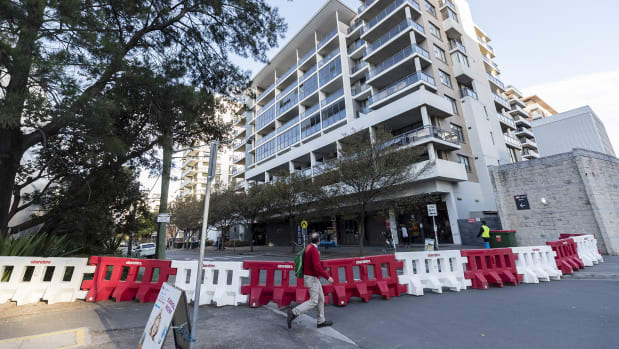 Residents were told to evacuate the building after cracks were discovered in Mascot Towers. Brook Mitchell

“The federal government now needs to play a leadership role and bring together all state and territory governments as matter of urgency to deal with the looming insurance crisis,” property council chief executive Ken Morrison said.

Federal Industry Minister Karen Andrews said states and territories needed to commit to a national response rather than announcing their own piecemeal strategies.

The next meeting of federal and state building industry ministers next month will consider longer-term provision of professional indemnity  insurance, but Ms Andrews said the states, which rejected her offer of help in implementing key industry reform recommendations at their last meeting in February, should change their stance.

“The states rejected my offer for the federal government to fund a dedicated, national taskforce to work in conjunction with the states to implement the [Shergold-Weir Building Confidence report] recommendations,” she said.

“I will again offer that at the next BMF in July, as I push for national consistency to restore confidence in our built environment.”

The Australian Property Institute says the crisis will have a flow-on effect on other professionals including valuers, which could flatten the property industry.

“Without insurance, surveyors in NSW, Queensland and Victoria will be non-compliant with registration requirements in those states, meaning that projects currently under way will have to stop,” API chief executive Amelia Hodge said.

One Boy’s Dream Vacation to Bauma, a Festival of Giant Construction Equipment – WIRED