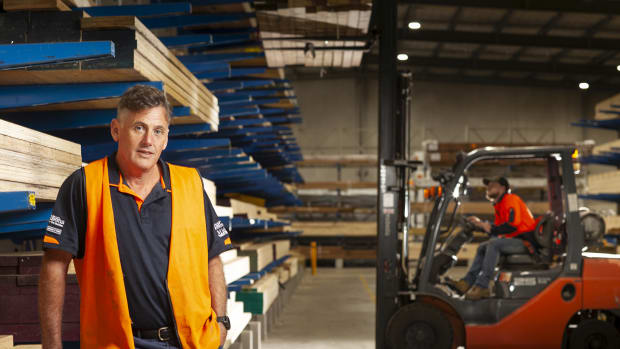 The decline in new housing investment isn’t limited to the apartment sector. Construction starts of detached houses fell 7.6 per cent to 27,103 in the December quarter – the biggest quarterly decline in eight years – the latest official figures show.

While the growing wave of infrastructure investment will offset much of the lost activity and absorb many of the jobs that will disappear from the white-hot residential sector, there will be losses. And prices of some inputs that enjoy demand in the booming sectors of transport, such as concreting and formwork, are surging.

Housing Industry Association economist Tim Reardon said the numbers he was seeing broadly matched Mr Dahlsen’s experiences in NSW and Victoria, and forecasts for the future pointed to falls.

“In Sydney the market has been slowing now for more than 12 months and as a consequence we’re seeing the level of activity on the ground slow,” Mr Reardon said.

There was typically an 18-month pipeline of work for construction firms and so slowdowns took some time before they were noticeable, but he said this 18-month period was coming to a close.

“There will, over the course of the next six months, be a reduction in the number of homes being built.”

However, it was important to maintain perspective. Mr Reardon said the construction sector had been white hot for the past five years.

“We’re coming off five years of record highs and if the market does slow back to 185,000 homes per year, that was the best year ever until just five years ago.

The result was the market was “recalibrating to a new equilibrium”.

He said this was primarily due to detached houses providing more investment certainty, as projects had comparatively short turnaround times. Big apartment projects were riskier in an environment of rapidly falling prices, as by the time the project was ready to come to market, the price could have slipped further.

“It’s riskier to initiate new projects in that kind of scenario; you worry that markets you sell into will be even weaker than they are now,” Mr Garrett said.

Mr Dahlsen said typically downturns in construction lasted 12 to 24 months and he didn’t see the downturn in NSW as being any different this time.

“We expect this to recover by the end of the year or early next year. Hopefully it won’t be so severe that we can’t just accept that we’ll be a little less profitable for a period of time.

“If that doesn’t work out the first thing we have to do is look at our cost base,” he said.

Construction has commenced on the new Bunnings Warehouse Kembla Grange; expected to be completed...

‘We want something more lasting out of this boom’: A mining city’s vision for...